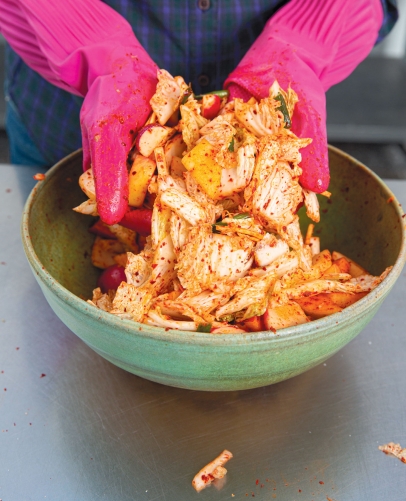 Small-Batch Local Kimchi is a Perfect Fit for Healthy Eating

Although there are already 180 registered types of kimchi, the spicy cabbage-based Korean condiment, Minnie Luong and husband Tim Greenwald felt the world was ready for some new variations on the theme. In 2015, they moved to Providence to set up Chi Kitchen, making two kinds of kimchi. Both are made from Napa cabbage (and branded “Napa”), though one is a traditional recipe that includes fresh-pressed black anchovy sauce and the other is a vegan version that uses miso to create that characteristic kimchi umami.

“My family is Vietnamese,” Luong says. “They were very food-centric. My dad did gardening and pickling and we always had kimchi when I was growing up.”

Luong was born on a rice farm in the Mekong Delta of Vietnam. When she was 3 years old, her family immigrated to Boston. When she was in third grade, they moved to Pawtucket, where she finished high school.

After a 10-year stint of work and college in Boston, she took a job in Los Angeles, where she met Greenwald. After the birth of their daughter in 2013, she yearned to start her own business, with Greenwald as her partner. They agreed to move back to Rhode Island “to be closer to family and for a good quality of life,” says Luong. “And, knowing that we wanted to be entrepreneurs, being on the I-95 corridor between New York and Boston was a plus.”

As a team, the couple worked hard to make the first batches of kimchi at Hope & Main, in Warren, and they launched the business at Thanksgiving in 2015, immediately taking it to 10 farmers markets, both in Rhode Island and in Boston. They are now in over 100 stores in New England, plus the Rhode Island School of Design, Roger Williams University, Emerson College and the Massachusetts Institute of Technology.

Their rapid success relied on many factors: their strict standards of quality for the cabbage they use (often sourced from New England farms); their ability to respond to customers’ feedback through interactions at farmers markets; and their adaptation of traditional recipes to more modern tastes.

Kimchi’s origins in Korea can be traced back thousands of years, since pickling and fermenting have always been excellent ways to preserve food. But the red pepper (gochugaru) that gives kimchi its distinctive kick and color first found its way from the Americas to Korea in the early 17th century. Kimchi became more widely known in the West during the Vietnam War, when South Korea asked the United States for help with commercial food production to feed the South Korean troops stationed there.

For Chi Kitchen’s kimchi, Luong and Greenwald use a dry brining (much shorter than the traditional 12 hours), and they chop the cabbage instead of fermenting it as a whole- or half-head.

“That allows the lactic acid probiotics to win out,” Luong says. “It’s fermented two days at room temperature and then stored in the refrigerator.”

There are non-cabbage kimchis, such as an apple and radish variety, and Luong points out that the shape and size of the fruit or vegetable will determine the length of fermentation. The other requisite ingredients are garlic, ginger and onion.

“You gotta get the hang of it,” Luong says. “But once you have it, cooking with kimchi is like a secret weapon. Stick your kitchen scissors in the jar to cut it up a bit and use it with grilled cheese, in pancake batter, mac ‘n’ cheese, burgers or tacos, mashed with avocado on toast or simply stirred into rice.”

“If you want to make sure you get the probiotic,” she stresses, “you want to add kimchi fresh from the jar, on top of your dish.”

Expansion of Chi Kitchen’s production and presence began with building out a large new commercial kitchen in the Lorraine Mills in Pawtucket in 2019. It continued with more than six months of research and development on two new products: Fermented Sesame Slaw and Kimchi Pickles. The former is redolent with sesame seeds and oil, using both red and green cabbage; the latter is fiery Persian cucumber pickles, fermented kimchi-style.

They also developed a new website (ChiKitchen.com) and an online ordering and shipping option—”to get more national attention and put Rhode Island on the map for kimchi,” says Luong. During this time of Covid-19, their sales have actually increased and they are looking to expand staff and facilities once again.

“‘Chi’ means energy or life force,” Luong says. “We started all this to be a healthy Asian food company. Kimchi is one of the healthiest foods on the planet.

“We knew there would be challenges,” she continues, “but if we could figure them out, everything else would follow.”

And so it has.

For a list of stores where you can find Chi Kitchen products, plus online ordering for shipping, visit ChiKitchen.com. 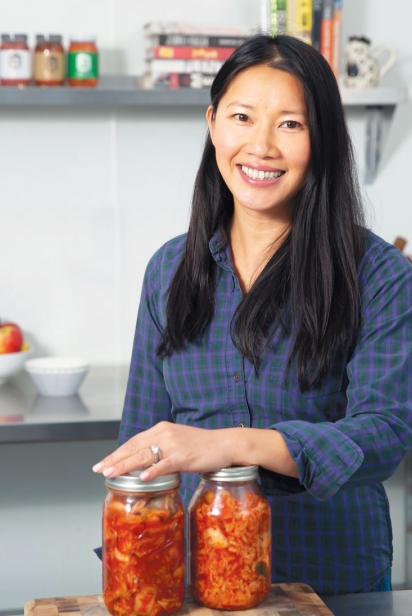 Luong calls kimchi her secret weapon in the kitchen.

Local, Fresh & In Your Inbox

Get seasonal recipes and food stories every month.