More than Coffee and Tea 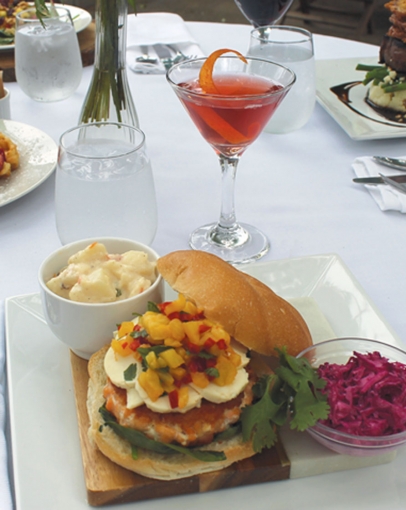 The Brooklyn Coffee, Tea & Guest House in Providence has much more going on than just those three services. It’s also an art gallery, café, music venue and—in a spicy collaboration—the newest home for a favorite former East Side restaurant, Blaze. Blaze chef/owner Phyllis Arffa joins forces with Berry-Jean Murray, entrepreneur extraordinaire. When Murray bought the Brooklyn House two years ago, she moved the staff of her IT firm to the second floor; set up guest apartments on the second, third and fourth floors; and enhanced the café offerings. “We wanted to build a community place with good, healthy food,” she says. She also opened up the first-floor music venue to include private parties, film fests and small theater productions. Because of social distancing, she has added dining areas in a tranquil leafy garden space and on the second floor. Blaze’s menu will feature fusion cooking, with an emphasis on local farm-fresh ingredients with vegan influences. “It’s a new world,” Murray reflects, “but we’re expanding even with the challenges that today presents.” BrooklynCoffeeTeaGuestHouse.com

see all
Article from Edible Rhody at https://ediblerhody.ediblecommunities.com/shop/more-coffee-and-tea